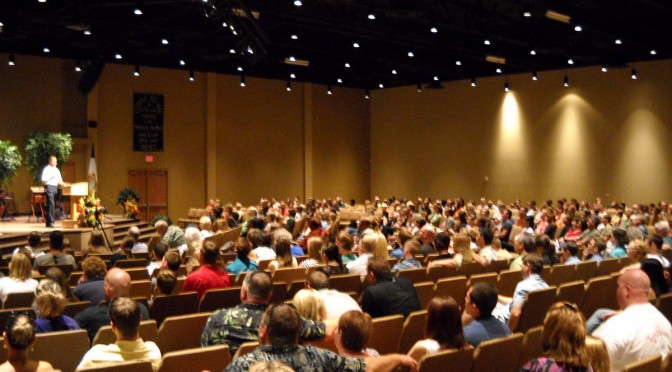 Our messages can be combined into world class events for Youth, College students, Men, Women or Families.

1) Endowed By Their Creator

Russ shows Biblical creation is foundational to the Gospel of Jesus Christ and to the freedoms that U.S. citizens enjoy. He reveals the USA was founded by predominantly Christian men and women on predominantly Christian principles & changes in America since Creation & Prayer were replaced with Darwinism in 1963.  A powerful & popular message!

The message is that God’s Word is true, word for word and cover to cover! Jesus refers to Noah’s Ark as a fact while dinosaurs have been used as a cornerstone to undermine the faith of billions of people. Russ reveals that whatever God’s Word tells us, we can put our trust in what He says. Eye-opening and inspiring!

3) Answers to the Top 20 Skeptical Questions

How do we know the Bible is the Word of God? Isn’t the Bible full of errors? Aren’t a day and a thousand years the same to God? How does a loving God allow a world full of death? Russ provides Biblical answers to some of the top questions posed by skeptics and true seekers. Faith-building!

This message caused a Secular university to launch an accredited course attacking Russ and Biblical creation. Russ stands up for real science & education, which have been undermined by false teachings, taking examples from textbooks to expose frauds which have undermined the faith of billions of people. No one with an open mind will believe in Darwinism after seeing this!

Old Earth beliefs, which provide the foundation for Darwinism, Humanism & Atheism,  are based on a belief earth’s crust formed over long ages rather than during the Global Flood (as foretold in 2 Peter 3:3-6). Russ exposes the unreliability of radiometric dating; reveals how a Global Flood destroys Old Earth beliefs; and shows how the ice age, continental drift, fossils, coal layers, Grand Canyon and more fit perfectly in a world that has endured a Global Flood.

6) A Pinch of Leaven

Russ refutes both Darwinism and ‘millions of years’ beliefs (which place death before Adam) in this fast-paced teaching. He also reveals that we can put our faith in the Word of our Creator and Savior, the Lord Jesus Christ – Word for Word and cover to cover!

In this fun and faith-inspiring message, Russ takes Biblical teachings and compares them to scientific facts to reveal that God’s Word is authoritative and trustworthy for guiding our lives – Word for Word & cover to cover.

The Lord Jesus told us to tell good from bad by the fruit and this message reveals ‘millions of years’ provides the foundation for many of the world’s ills from Darwinism to communism to eugenics to abortion. Russ clarifies the hopelessness of the Secular worldview and the hope of the Biblical view in this powerful message.

9) The Three-Day Formation of Grand Canyon

Grand Canyon is a pillar of Old Earth beliefs which place death before Adam and undermine the faith of billions of people. Russ, who leads tours to Grand Canyon, captures the chasm for God’s glory, revealing undeniable evidence of the Canyon’s rapid formation and of God’s global flood judgment (Did you know strata layers 8,000+ feet deep have been removed from above the Canyon’s rim?! Secular-biased geology doesn’t like to discuss this)!

How to Invite Russ

Use the Response Form on our Contact Page to find out more!